An FBI-led law enforcement takedown dubbed Operation Eversion has led to the indictment of eight defendants and the seizure of infrastructure associated with the 3ve ad-fraud scam. Symantec was involved in an industry group which assisted in the investigation by helping identify infrastructure used by the attackers.

3ve specializes in creating fake versions of legitimate websites in order to carry advertisements. It then drives fake traffic to these advertisements using infected computers. These fake visitors generate click-through revenue from the ads for the attackers.

3ve leveraged up to 700,000 infected computers and controlled over 1 million IP addresses at one point. Much of the fraudulent traffic was facilitated through botnets controlled by the Miuref (Trojan.Miuref) and KovterTrojan.Kotver) malware families. 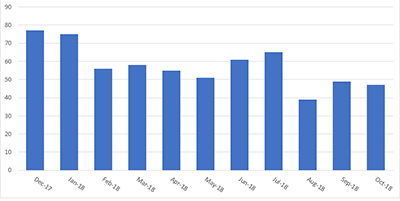 Figure. Symantec detections of Miuref malware family by month. The low number of detections is consistent with the fact that the attackers behind the Miuref botnet mostly targeted data center computers rather than endpoint computers.

The Kovter component of the ad-fraud operation used the Kovter botnet to run a hidden instance of the Chrome web browser on infected computers. The browser was used to visit the counterfeit websites. Once loaded, they requested ads to be placed on the website pages.

Indicators of Miuref and Kovter infection

Miuref and Kovter are Trojans spread through malicious email attachments and drive-by downloads from infected websites.

Miuref loads several executable files onto infected computers. They may be found in one or more of the following locations:

The HKEY_CURRENT_USER “Run” key is set to the path of one of the executables listed above:

Kovter infections are located mostly in the registry, but the following files may be found on infected computers:

Kovter is known to hide in the registry under:

The keys appear like random values and contain scripts. In some cases, a user-agent string can be clearly identified. An additional key containing a link to a Bash script on the hard drive may be placed within the following registry key:

Kovter is an evolution of an older botnet known as Poweliks (Trojan.Poweliks). Like Kovter, Poweliks is a fileless threat that was developed from an earlier file-based variant, known at that time as Wowliks.

Like Kovter, Poweliks was mainly deployed as a click-fraud botnet. Infected computers would silently visit web pages in a hidden browser window and display advertisements in that window.

Symantec and Norton products protect against these threats as:

If you believe you may be infected with Miuref or Kovter and are not a Symantec customer, you can use our free tool Norton Power Eraser to remove it from your system.

Customers of the DeepSight Intelligence Managed Adversary and Threat Intelligence (MATI) service have received reports on uses of the Kovter malware and how adversary groups have utilized this fileless threat in malicious advertising attacks.