Everyone that owns digital mailboxes has encountered annoying spam emails that show up unsolicited. But have you ever wondered where they come from?

According to the data analyzed by the Atlas VPN team, based on AV-TEST statistics, 54% of spam emails in the last six months originated from two global superpowers — the United States and Russia.

While spammers in the US were behind a whopping 44% of global spam emails, Russia followed in second, accounting for nearly 10%.

Germany occupies the third spot in the list. Close to 8% of the spam emails sent in the last six months originated in the country. In the meantime, France sent out 4% of global spam emails.

China, another global superpower, rounds out the top five list of countries that distributed most spam emails over the past six months. Despite the country reinforcing internet censorship, a little over 3% of spam emails originated in China.

Other countries that are frequent senders of spam mail include Japan, Ukraine, Brazil, Spain, and Iran. Each accounts for around 2% of global spam emails. Nearly a third of spam emails are dangerous

Spam mail is notorious for being annoying. However, few know that such emails may be dangerous and contain links that lead to phishing sites or malicious attachments that can install malware on your device. 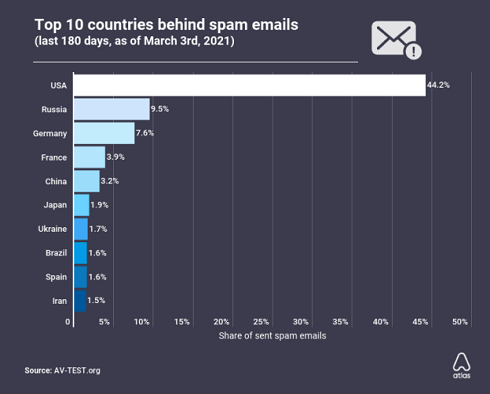 The majority, 5,699 spam emails, were phishing attacks. They made up more than 23% of all such emails distributed in this period of time. In the meantime, 1,783 or 7% of spam emails were blackmail, while 594 or 2% were scam emails.

The most common malicious attachments were archives. They were detected in 182 or nearly 1% of spam emails from the past few weeks.

Advertisements, which are the poster child of spam mail, made up around a quarter (25%) of such emails in the past two weeks. They were sent out 6,171 times.

All major email providers have spam filters built in to block any spam messages that may come your way. However, they do not always do the job.

Therefore it is helpful to know other ways to guard against such emails, which at best will clutter your inbox, at worst, may contain malware, which can infect your device.

Do not participate in chain letters. Forwarded or chain emails often visibly list the email addresses of everyone that receives them. This makes people that participate in such activities an easy target to spammers who may use such email lists in their attacks. Be careful when signing petitions, as these may also be used to gather email addresses for attacks.
Create alias email addresses. Use different email addresses for different services. This way, if you receive spam, you can track it to a specific website that you signed up to. Many services allow you to create multiple email addresses and link them to your core account, which you can keep private.
Use a complex email address. The more complicated your email address is, the less likely spammers are to guess it. Avoid common words and expressions, which criminals are likely to go after.
Adjust email privacy settings. Make sure that your inbox spam filter settings are set on the highest level.
Delete spam emails if you receive them. Finally, if a spam email does reach your main inbox, get rid of it right away. Never click on any links or open any attachments provided in the email as they may contain malware that can infect your device.