Sophos has published the latest ’Dirty Dozen’ of spam relaying countries, covering the second quarter of 2013. As the US retains the top spot among spam-relaying countries, Belarus makes a significant jump into second place. And three new countries enter the top twelve : Ukraine, Kazakhstan and Argentina, while three other countries exit the Dirty Dozen: France, Peru and South Korea.

With more than a billion people and an increasing demand for internet access in both countries, it’s no surprise to see China and India in the Dirty Dozen; and with more than 300 million people and the lion’s share of the world’s internet connectivity, it’s also no shock that the US leads outright. So what happens when spam scores are scaled up or down in proportion to each country’s population?

Half of the volume-based countries are gone, and others that would usually fly under the radar when measured on spamming volume alone, like Luxembourg and Singapore, suddenly burst onto the scene. This doesn’t mean that Singapore is replete with spam-related cybercriminality.

Although the Dirty Dozen denotes the extent to which a country’s computers are used for delivering spam, it doesn’t identify where the spammers themselves are located. That’s because most spam is sent indirectly these days, especially if it is overtly malevolent, such as:

· Phishing emails: These try to lure you into entering passwords into mock-ups of a real site such as your bank or your webmail account.

· Malware links: These urge you to click links that put you directly in harm’s way by taking your browser to hacked websites.

· Malware deliveries: These use false pretences, such as fake invoices, to trick you into opening infected attachments.

· Identity theft: These invite you to reply with personally identifiable information, often by claiming to offer work from home opportunities.

· Investment scams: These talk up investment plans that are at best unregulated and at worst completely fraudulent.

· Advance fee fraud: These promise wealth or romance, but there are all sorts of fees, bribes and payments to hand over first.

"Remember that the Dirty Dozen doesn’t tell us from where the spam originates," said Paul Ducklin, Sophos security evangelist. "It tells us how spam gets relayed from the crooks to their potential victims. Even if you’re the most law-abiding citizen of the most law-abiding country in the world, you might be helping to project your own country into the Dirty Dozen if you don’t take security seriously on your own computer. It may sound corny, but security really does begin at home."

There are a few simple precautions can help enormously, according to Ducklin. These include "timely security patching, an up-to-date anti-virus and a healthy skepticism about unwanted attachments and ’too good to be true’ offers. By taking these steps, you’ll not only protect yourself, but also help to protect everyone else at the same time."

The top 12 spam-relaying countries by volume for April to June 2013: 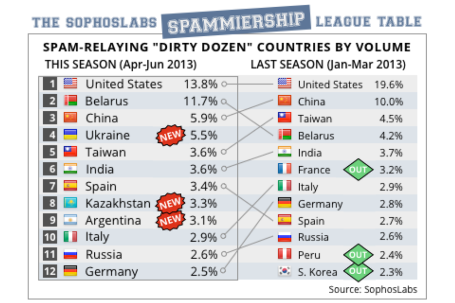 The top 12 spam-relaying countries by population for April to June 2013: 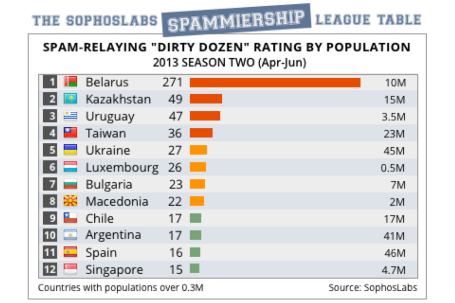