Radware’s Emergency Response Team has been monitoring the emergence of a new botnet this week. The ADB.miner malware takes advantage of Android-based devices that expose debug capabilities to the Internet. When a remote host exposes its Android Debug Bridge (ADB) control port, any Android emulator on the Internet has full install, start, reboot and root shell access without authentication. Part of the malware, xmrig binaries (Monero cryptocurrency miners) are executing on the devices.

Based on the information from the Radware Deception Network, a multitude of devices are impacted by this new malware, including but not limited to, mobile phones, media players and smart TVs. Netlab360 recently published a detailed analysis and coined the name ADB.miner.

Radware’s Deception Network algorithms detected a significant increase of activity against port 5555, both in number of hits and in number of distinct IPs. Port 5555 is one of the known ports used by TR069/064 exploits such as witnessed during the attack on Deutsche Telekom using a Mirai-based malware in November, 2016. In this case, the payload delivered to the port was not SOAP/HTTP but the ADB remote debugging protocol.

The Monero wallet address that collects the return on the mining investment is 44XT4KvmobTQfeWa6PCQF5RDosr2MLWm43AsaE3o5iNRXXTfDbYk2VPHTVedTQHZyfXNzMn8YYF2466d3FSDT7gJS8gdHAr. 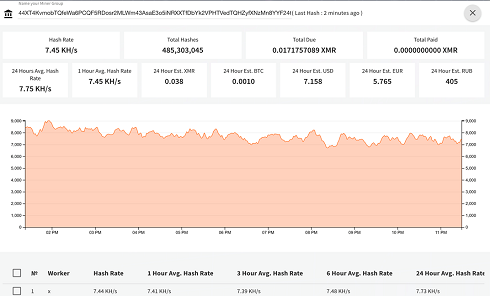 Even if the mining effort is not returning large amounts for the hackers, the thread is globally spread and impacting the infected devices in terms of CPU resources and power consumed.

For further network and application protection measures, Radware urges companies to inspect and patch their network in order to defend against risks and threats.

Under Attack and in Need of Emergency Assistance? Radware Can Help Radware offers a service to help respond to security emergencies, neutralize the risk and better safeguard operations before irreparable damages occur. If you’re under DDoS attack or malware outbreak and in need of emergency assistance, contact us with the code "Red Button.”

To know more about today’s attack vector landscape, understand the business impact of cyber-attacks or learn more about emerging attack types and tools visit DDoSWarriors.com. Created by Radware’s Emergency Response Team (ERT), it is the ultimate resource for everything security professionals need to know about DDoS attacks and cyber security.