Following the fine imposed by the French Data Protection Authority[1] (the “CNIL”) to Google and its condemnation in first instance, on UFC-Que Choisir’s initiative, for unfair terms relating to Data Protection[2], our association has initiated today a class action against Google before the Tribunal de Grande Instance of Paris, for GDPR (General Data Protection Regulation) infringements. The aim of this action is to stop the insidious data exploitation of Google users’ personal data, especially the ones who detain Android equipment with a Google account and to compensate their losses with up to 1000€.

As the Tribunal de Grande Instance revealed in the decision (appealable) sentencing Google, on UFC-Que Choisir’s initiative, for unfair terms, the giant American must obtain a real consent to the use of consumers’ data, and “can only unfairly provide information to consumers on the collection of personal data where Google present it as a simple and only condition of the improvement of services offered, whereas the first and real purpose of this collection is to send personalized ads to this same consumer by exploiting commercially all his personal data”.

A contractual maze inflicted to users

Despite these two decisions, Google keeps drowning consumers in interminable Privacy Policies (more than 1000 lines, 5700 words, 57 references and 100 links to other contents) and keeps creating an obstacle course to disable geo-tracking (not less than 6 actions are necessary to access information on the different methods used by Google).

For geo-tracking and ads personalization processing, Google must obtain an unambiguous consent from its users. This implies a clear affirmative action from them: to tick a box. Google chose to bypass this fundamental rule, taking for granted the authorization from its users.

From UFC-Que Choisir’s point of view, this is a clear infringement of the GDPR, and allows Google to collect a massive amount of personal data without its users even knowing it: where a phone stay still, it transmits its geo-location nearly 340 times a day[3]! Far from being a fantasy, a glance at a map of the history of locations collected by Google of one user for 5 years underlines that the Internet Giant knows everything about you, follows you everywhere, even in planes! 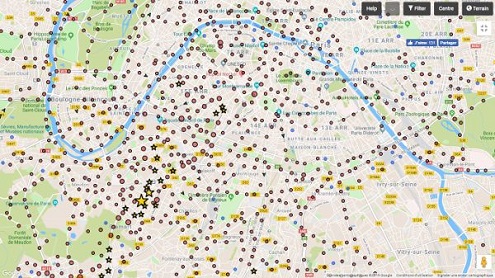 Overview of a person’s geolocations for 5 years

Number of geolocations collected in a same place (increasing order) This intrusion of consumers’ privacy causes them clear moral damage which must be compensated! Almost 200 consumers asked to initiate this class action to this end.

The launch of a class action

After an unsuccessful formal notice, UFC-Que Choisir is launching today a class action for French Consumers against Google Ireland and Google LLC before the Tribunal de Grande Instance of Paris.

Our association asks Google:
• To stop the exploitation of its users’ personal data that were unlawfully collected.
• To obtain a real consent from its users to the collection and the processing of their personal data within its services and applications,
• To compensate all the consumers - who have Android equipment (smartphone, tablet,…) and a Google account - of up to 1 000€ for the intrusion of their privacy. UFC-Que Choisir reminds that at this stage of this action, it is not necessary to reveal yourself and invite interested French consumers to read our FAQ (www.quechoisir.org), on this new action, made to answer to questions which might be risen.