Panda Security: Trojans were the malware that caused most infections in November

According to data gathered by the online antivirus Panda ActiveScan, Trojans (25%) and adware (23%) were the malware that caused most computer infections in November.

“This has been the trend throughout the year. The reason behind is the fact that both malware types allow cyber-crooks to obtain financial benedit: Trojans through theft of confidential data like banking and email passwords, and adware through companies that pay cyber-crooks to display unsolicited advertising of their products through pop-ups, banners, etc.”, explains Luis Corrons, Technical Director of PandaLabs. 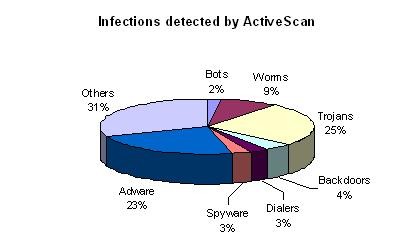 Worms ( 9%) were the third type of most harmful malware in November, far behind Trojans and adware. Backdoors (4%), spyware (3%), dialers (3%) and bots (2%) were the culprit for the rest of infections.

“31% of infections have been grouped under the heading “others”. This refers to multiple malware types (viruses, hacking tools, PUPs, etc.) which, even though they don’t account for a large percentage of infections separately, they do so when put together. This also proves that today there is a greater variety of malware than ever”, says Corrons.

The most active malicious codes

The ranking of malware that most computers have infected is headed by the Downloader.MDW Trojan, designed to download other malicious code onto systems. Second place is for Lineage.BZE, created to steal passwords for online games. The third most harmful malicious code in November was Brontok.H, a worm that spreads by sending emails and copying itself to the computers it infects.

Fourth and fifth place are taken by the Puce.E and Autorun.DZ worms respectively followed by the VideoAddon adware created to display ads in pop-ups.

Seventh place is taken by Dropper.UN, whereas the Perlovga.A worm comes eight. The Hupigon.AZG backdoor and the PC-Prot adware occupy the last positions in the ranking.

For more information about these and other threats, go to the PandaLabs Encyclopedia.