Kaspersky researchers have detected a sharp rise in the volume of malicious software aimed at stealing credentials and money from users’ bank accounts. In fact, in Q1 2020, 42,115 files of this type of malware were found. This is more than two and a half times higher than in Q4 2019. These are among the main findings of Kaspersky’s IT threat evolution in Q1 2020 report.

Mobile banking Trojans – or bankers – are a well-known threat in the cyber-community and the driver behind their activity is obvious. They are usually used to steal funds directly from mobile bank accounts. These malicious programs typically look like a legitimate financial app, but when a victim tries to access their genuine bank app and enter their security credentials, the attackers gain access to that private information too.

In the first quarter of this year, Kaspersky detected more than 42,000 modifications of various families of banking Trojans, the highest level recorded in last 18 months. 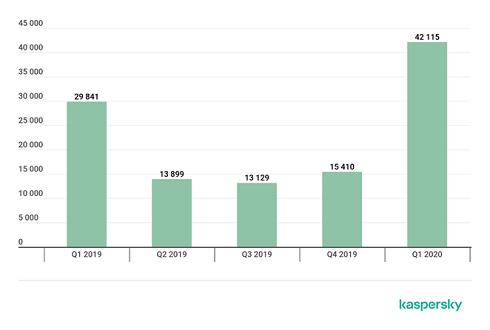 Moreover, the share of bankers found in the mobile threat landscape throughout the quarter increased as well to 3.65% - indicating growth by 2.1 percentage points against the last quarter of 2019. The most affected country, as shown by the share of users attacked with mobile banking Trojans, was Japan (0.57%), followed by Spain (0.48%) and Italy (0.26%).

“In the age of social distancing and lockdown we are all using our mobile devices more often to use financial services – be it for remote communication, payments or transactions. These devices have become one of our main in-hand tools and we should not let fraudsters take any benefit from our reliance on them,” said Victor Chebyshev, a security expert at Kaspersky.

To reduce the risk of your device being infected by banking Trojans, users are advised to :
• Install applications only from trusted sources, ideally from the official Google Play app store ;
• Use a robust security solution like Kaspersky Internet Security for Android to protect you from malicious software and its actions ;
• Do not perform the rooting procedure as this will provide cybercriminals with limitless capabilities to exploit your device.