May 2009 by Infosecurity Europe

Reed Exhibitions, The 2009 Infosecurity Europe show - held at Earls Court in London this week - has proven to be a recession-proof success, with visitor attendances up on the 2008 figures by 5%. 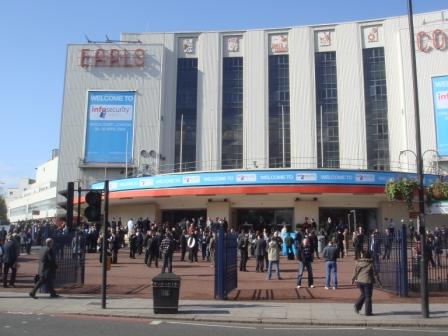 According to Tamar Beck, Group Exhibition Director, Reed Exhibitions, attendance at this year’s three day Infosecurity Europe event were 12,445 visitors, something she attributes to an industry which is clearly bucking the trend by growing with innovative companies alongside a jammed packed education programme filled with experts from around the world.

"With new educational attractions such as the Security Expert Forums and Security Cafes giving show attendees access to free information and advice from some of the industry’s leading IT security movers and shakers as well as top people from the Information Security Forum, ISC2, ISACA and the ISSA, plus a huge array of vibrant and creative exhibition stands - this year’s show stood out like a beacon in the information security industry calendar," she said.

"And with keynote speeches from influential people such as the Right Honourable David Blunkett, MP, the former Home Secretary, and fascinating panel discussions from Lord Erroll, the president of the E-Business Regulatory Alliance and Julia Harris, Head of Information Security with the BBC, the event has built on its exhibition origins," she added.

All of the educational and sponsored seminars, she explained, were a great success, with many of them over-subscribed.

A riveting keynote speech with the Rt Hon. David Blunkett, MP, was a standing room only event, even in the secondary streaming room area, with reporters from the BBC, The Register, ZDNet, Computing, Computer Weekly and other prestigious publications all wiring reports from the show.

"This year’s three-day event has been an extraordinary effort by the show team, exhibitors and speakers, all of whom have worked hard to continue the success that is the Infosecurity Europe show," she said.

"We look forward to welcoming everyone back at next year’s show 27th to 29th April 2010," she added.

Exhibitors were also pleased by the show with comments such as “

“The show has enabled us to move over $1m worth of business through our pipeline.”

“Infosecurity Europe was phenomenal this year, it was amazing for us, we got even more leads than last year Infosecurity was up 40% in leads whilst at RSA this year our leads were down by 30%. Well done to the Infosecurity Team, the quality and volume of visitors to our stand , the media coverage, and our hugely successful seminar on Cybergeddon made this show a tremendous success for Finjan” Yuval Ben-Itzhak, CTO, Finjan

“Lots of companies at Infosecurity Europe this year. It was good to see the return of the smaller ones as well as all the big names there. It wasn’t nearly so cramped with space in the aisles to accommodate the overflow of people wanting to watch the presentations that were being given. Always good to meet up with old friends and colleagues from both industry and customers. A good turnout of press and analysts as well. All-in-all an excellent event.” Dr. Guy Bunker, Chief Scientist, Symantec Corporation

“An extremely successful show for Lumension, very worthwhile, enabling us to engage our partners, customers and identify new opportunities. Issues such as PCI compliance that were emerging issues last year have now moved to centre stage in our discussions. Absolutely Phenomenal”. Andrew Clarke, SVP International, Lumension

“Infosecurity Europe this year covered a broadest of issues ranging from e-crime, social networking, sophistication of attacks, web application security but with minimum emphasis on cloud computing, in contrast to the RSA conference in the US. In discussing with many participants, it was clear that cloud computing is on their mind and most likely it will be the focus of Infosecurity 2010.” said Philippe Courtot, CEO and Chairman of Qualys.

“This year definitely reinforced the fact that Infosecurity Europe is the No1 security show in Europe and the one we look to support each year.” Kay Reynolds, Marketing Manager, BT.

“We’ve been impressed with the quality and quantity of visitors to our stand at Infosecurity Europe this year. We have seen significantly more end user decision makers and buyers than we saw at the RSA Conference in San Francisco and have been pleased with the increase in the volume of visitors to our stand this year compared to last year.” Chris Schwartzbauer, Vice President of Shavlik Technologies.

“As a keynote speaker it doesn’t matter where the data is, its all about assurance,. The show this year allowed me to see the security industry all under one roof, and with the space to move!!!” Raj Samani, VP of Comms, ISSA

“Infosecurity Europe this year has been extremely positive for PGP Corporation; we’ve been particularly pleased with the high number of quality of leads who have stopped by the stand. The new venue is bigger and better than before, and is well equipped to deal with the increasing number of security professionals who rely on the event to find out what’s new in the industry.” Jamie Cowper, Director Marketing EMEA at PGP Corporation.

“The show has been extremely successful which has clearly benefited from the new location. Caroline Ikomi, Technical Director, Check Point

“People didn’t just come to browse, this year they came with projects in mind and ready to get them off the ground.” Nick Billington, MD, BitDefender

“We’re impressed with the new location and the quality of conversations and the overall number of visitors to the show.” Sophie Lawson, Marketing Manager, Novell

“It’s been an excellent turn-out this year, which has proved that security is taken seriously even in times of recession.” Spencer Parker, Director, Scansafe

“Infosecurity Europe is proving that the security industry is very vibrant. The shift to new emerging areas such as DLP, white-listing, and IT-Global Risk & Compliance are showing us increased awareness and demand that will lead the economy forward.” Ed Brice, SVP World Wide Marketing, Lumension

“We ran out of hand-outs! Lots of activity in the security industry – lots of great quality leads – so we’re very pleased indeed.” Andy Grolnick, CEO, Logrhythms

“It’s exceeded our expectations given the economic climate – with security still at the forefront of the visitor’s thoughts.” Angelica Micallef Trigona, Director of Communications, GFI

“The venue move to Earls Court has given the event renewed vigour and it was heartening to see that the European security community were able to ignore the wider economic concerns to attend in such numbers.” Andy Travers, Regional Director UK and Ireland, F5

“After all the fear and uncertainty and doubt, customers are quite simply looking for solid answers to pressing needs. Infosecurity Europe had an entire panel devoted to what in security we’d throw “on the pyre” and what struck me was how interested people were in knowing what to do instead. It’s not every day I get to discuss voting redesign goals with Whitfield Diffie!” Dan Kaminsky, I O Active

“This is the first time we are exhibiting – it has been a good show with a great number of visitors. We have gained some very interesting leads which has given us a great business advantage.” Paolo Bernardwi, MD, Ireth

“Very good show with great leads! Met new and existing customers! We will be back as the right people come to the show.” Patrick Warley, Head of R&D, Just Rams

“Infosecurity Europe this year was a great event. Earls Court is miles better than Olympia. Much more space – and yet it felt like a much more intimate event. The presentation rooms (I spoke in the Business Theatre) were fantastic compared to the ones at Olympia – more space to fit more people in and comfortably, with a lot better AV. There also didn’t seem to be nearly as much sound from outside the room, making it considerably easier to speak. The Press Room was also a big improvement over last year – again, more space so you didn’t feel you were fighting for a table.” Dr. Guy Bunker, Chief Scientist, Symantec Corporation

“Externalising data is not an option it is a business requirement. Consideration for how to secure that data externally is paramount. The challenge is that security as a service is a very immature market that needs identity to be externalised alongside the data”. Adrian Seccombe

“Phenomenal!! 60% up on leads since last year, amazing quality of visitors with much larger organisations attending” Martin Burker, MD of Secure I.T. Disposals

The Infosecurity Europe 2010 show - one of five planned events around the world - will be held in London on 27th to 29th at Earls Court One.