European IT initiative designed to retain control over data 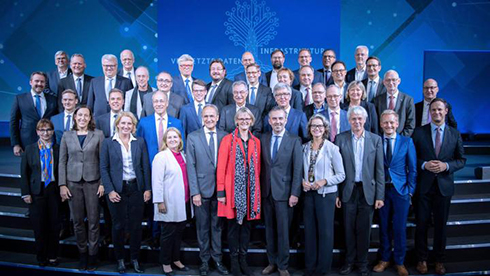 The German Federal Ministry for Economic Affairs and Energy unveiled Gaia-X at the Digital Summit 2019 on 29 October in Dortmund. The goal of this large-scale project is to strengthen the competitiveness of European industry on international markets. At its core is the establishment of a secure cloud – for digital transformation and connectivity, and as the launch-pad for new AI (artificial intelligence) applications. Partners include the Friedhelm Loh Group, a leading example of Germany’s Mittelstand with global operations. Owner and CEO, Prof. Friedhelm Loh had a key role in launching the Gaia-X project.

Dortmund/Herborn, Germany, 29 October 2019 – Automotive OEMs have called on their suppliers to make data available across the entire supply chain – the first industry to make this move. At VW, this digital information will be provisioned via Amazon Web Services, at BMW via Microsoft Azure. For suppliers, this means an element of risk, and the urgent need to act. They do not want to endanger their position as suppliers, but wish to retain control over their production data, and therefore their proprietary knowledge, which is distributed across a total of 100,000 factories. In this context, a central question will be: Who does the data belong to? This issue of data ownership and control will be critical to success on competitive international markets.

To strengthen the position of European industry and to promote solutions that address the corresponding challenges, Federal Minister Peter Altmaier today officially launched the Gaia-X project. This aims to establish a large number of small, geographically dispersed edge data centres with open cloud connectivity that will enable a new class of industrial applications. The project was presented at the Data Summit, hosted by the Federal Ministry for Economic Affairs and Energy in Dortmund.

The group has gained an understanding of real-world requirements as a result of hands-on experience with the implementation of the digitally integrated Rittal plant in Haiger. “Because there was not a suitable answer to our specific imperatives, we worked with start-ups German Edge Cloud and IoTOS – the youngest member of the Friedhelm Loh Group – and with Bosch Connected Industry to develop a solution.” ONCITE is the first turn-key AI-based edge cloud data centre for the secure, real-time processing and intelligent analysis of data captured in manufacturing environments. “The result is a solution for German industry made by German industry – in collaboration with expert partners such as Fraunhofer, IT and AI specialists and other companies,” emphasised Prof. Loh.

“Gaia-X has to be a success”

Following a speech by Anja Karliczek, Federal Minister of Education and Research, as well as participants in the Industry 4.0 platform, Prof. Loh took the opportunity to explain the viewpoint of Germany’s Mittelstand: "If we have control over our data, real-time processing, and edge computing, then we will succeed in putting Industry 4.0 on an entirely new footing, and to implement value chains that truly work, enabling competitiveness.” Prof. Loh stated that data ownership, i.e. decision-making control both in-house and within the network, is one of the key issues. The entrepreneur underlined: “We are not working against public and private cloud providers; we are seeking to reconcile the pursuit of our own solutions with the existing cloud offerings in a way that gives us decision-making control.”

Prof. Dr Loh appealed to the German federal government: “Industry needs the support of the state and vice versa.” He suggested that there had been enough talk about Gaia-X. “We need to get down to action. We need to establish examples in German industry. Gaia-X has to be a success. We’ll do it, and we can – with everyone’s support.”