Autumn harvest: Half of Q3 DDoS attacks happened in September

In the third quarter of 2019, the number of DDoS attacks rose by a third compared to the previous period (30 percentage points) and Q3 2018 (32 percentage points) according to statistics gathered from Kaspersky DDoS Protection.This growth was primarily due to a spike in malicious activity in autumn. In fact, 53% of the quarter’s DDoS attacks were carried out in September.

The rise is caused by a large number of rather simple types of attack. Nonetheless, in previous quarters of this year, the total growth stemmed from a surge in the number of smart attacks, focusing on the application layer – usually carried out by skilled cybercriminals. In Q3 2019, the share of ‘smart’ attacks dropped to 28% of all DDoS attacks, from 50% in Q2, and grew by only seven percentage points in the Q3 2018 results.

This change can be explained by a boom of DDoS activity at the beginning of the academic year. While the early summer months of the quarter were quiet, the majority of DDoS attacks (53%) was detected in September. Kaspersky statistics reveal 60% of the attacks that were prevented during this month were conducted against schools and electronic journal sites. Based on this, Kaspersky experts suggest that these attacks were carried out by school-age hooligans who do not have a deep understanding of how to organise DDoS campaigns. 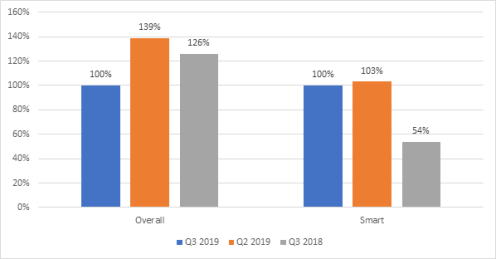 Pic 1. The average duration of the DDoS attacks

“Despite this spell of seasonal activity from young hooligans, who appear to celebrate the beginning of the school year with a spike in DDoS attacks, the more professional market of DDoS attacks is rather stable. We have not seen an explosive increase in the number of smart attacks compared with the previous quarter and the average length of attack remains the same. However, this still causes serious damage to business. Our survey of IT decision makers revealed that DDoS attacks are the second most expensive type of cyber-incident that led to date breaches for SMBs, with the average cost of a breach estimated at $138,000.”- comments Alexey Kiselev, Business Development Manager on the Kaspersky DDoS Protection team.

Ensure that web and IT resources can handle high traffic;
Learn in advance how to contact your internet service provider in case you are suffering a DDoS attack;
Implement professional solutions to protect the organisation against attacks.

For example, Kaspersky DDoS Protection combines Kaspersky’s extensive expertise in combating cyberthreats and the company’s unique in-house developments. The solution protects against all types of DDoS attacks regardless of their complexity, strength or duration